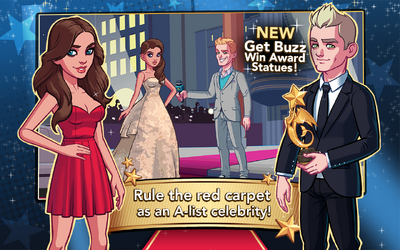 The STAR Awards is the Academy awards for Stardom: Hollywood. You can be nominated for either best actor/actress or best supporting actor/actress. If you win the awards, you will get your trophy for winning.

There are four parts to the awards, some determining if you will win or not. However the methods to winning are very random, but it is crucial that you have at least gotten 5 Stars on whatever you were nominated for.

In order to get nominated, you must have filmed The Wooden Cuckoo and be at least Level 11. If you are wondering why you have not gotten nominated yet, film this movie and see if you get your nomination. It does not matter what rank or level you are on; you must have filmed this movie. If you haven't gotten it yet, be patient and keep playing the game until the goal comes up.

In order to get nominated, you must have filmed either an 8 hour, 12 hour, 24 hour, or 48 hour film. The nominations are completely random and will choose any movie to to nominate you in.

Charlene Chanelle will be the one who will call you about your nomination. You must wait 48 hours for the event, and you cannot spend stars to skip the wait.

On your first nomination, Charlene will ask you to wear something nice and pricey for the nominations. The piece costs 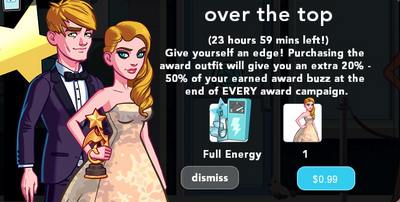 In the Starnews tab in your menu, you can check out your chances of winning in the buzz tab. This will only apply if you have currently been nominated.

There are four nominees, including you, listed in the buzz feed. Initially, everybody starts with an even 25.00% chance of winning. By filming projects during the 48 hour wait, you can create buzz and raise your chances of winning.

You will lose 1% for every hour that has passed without completing a project. Your competitors will randomly gain or lose percentage overtime. As of now, it's been observed that filming a 24 hour movie will gain you 20% - 50% increase in buzz.

Once the awards begin, any more attempts to create buzz will not be accounted for.

However, you can gain an extra 20% - 50% of your total earned buzz at the end of the 48 hours of every award campaign, by purchasing and wearing the award outfit. For example, 20% Total buzz earned, when wearing the award outfit once the 48 hours are over, could increase your buzz between 4 - 10 points. This award outfit will come up as a pop-up notification in the last 24 hours before the awards where you can buy it for $0.99.  If you already have the outfit, a notification will pop up telling you how much buzz was increased.

You have the option to:

She also reminds you to wear something nice, but this is unknown whether this will help you up your chances in the Awards. If you chose to send the limo, you will be automatically taken to the Downtown Theater where the awards take place. If you tell her you're not ready, Charlene will call you again in a few minutes.

Of course, before you can go into Downtown Theater, you must have your interview with Ray Powers. He will ask you two questions about your movie, and they can vary. When he states his question, you can either choose that he was correct or that he got his facts wrong.

These are the topics he may ask you about:

If you get a question wrong, Ray will correct you and move on. It is unknown whether this determines your fate of the Awards, but it's highly recommended you get these right, as you have nothing to lose from getting the questions right. You will get

10 for getting the questions right.

At the awards, the announcer will conclude whatever happened beforehand and then begin announcing the nominations for Best Actor/Actress or Best Supporting Actor/Actress.

And the nominees are:

The announcer will then go through four nominees, including you at the end. Your rival may even show up in this list.

As the announcer is about to announce the winner, you have the option to either:

Again, it is unknown whether these can raise your chances of winning the awards.

If you won, you will get your fans. If you lost, you have the options to:

After the awards, you will be interviewed again by Ray Powers whether you have won or not.

If you won, Ray will congratulate you on your award and ask how you feel about it. You can say either:

You will also be sent to the Red Carpet if you won.

If you lose, Ray will sympathize on your loss and ask how you feel about it. You can say either:

You will be sent back outside Downtown if you lost.

Either options will give you some small cash or xp.

Whether you have won or not, it's interesting to know what may have affected your winning.

The things that are confirmed are:

The benefits of winning are that you get lots of fans for it, and a permanent trophy that you can view from your menu in the 'Awards' tab.

Your fate is determined upon entering the theater. Trying to restart the game to win will not work, as you will immediately be in the theater as you restart.

Retrieved from "https://stardom-hollywood.fandom.com/wiki/STAR_Awards?oldid=21018"
Community content is available under CC-BY-SA unless otherwise noted.