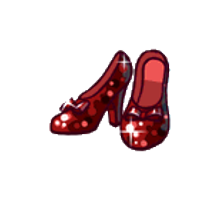 You get a call from your agent to meet you at Supercool Studios, where he will introduce you to Horatio T. Himpleton, the director working on an "Oz" film. Talk to Horatio and he'll say that he thinks you'll make a perfect Wizard in his upcoming film, the catch is, he wants you to be in a 5 part miniseries he's producing for television, The Battle for Bristondale. You are expected to finish all 5 episodes within a week, but you will be given the part if you complete at least 3. Also, if you get a four-star rating or higher on "Escape to Oz", you will get a special clothing item.

Line 2: I assure you the kingdom will be safe.

Line 1: So, the raiders were a warning?

Line 2: That means Count Dormifor is planning his attack!

Line 1: Dormifor's forces are overrunning us!

Line 2: Where you'll find horses of all colors!

Retrieved from "https://stardom-hollywood.fandom.com/wiki/Oz?oldid=16608"
Community content is available under CC-BY-SA unless otherwise noted.