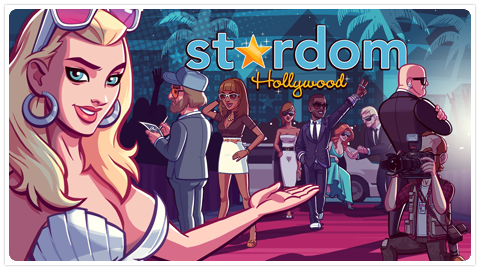 New to the Wiki?

Stardom: Hollywood is a casual game created by Glu Games Inc. and Blammo Games Inc. for iOS, Android, and Mac OSX. It can be downloaded from the iOS App Store, Google Play Store, Mac App Store, and Amazon App Store for free and played on iOS 4.3+, Android 2.3+, and OSX 10.7+.

Stardom: Hollywood was released in February 2013 and uses the freemium business model. Although the game is free to play, players can use their iTunes or Google Play accounts to make in-game purchases of game currency to buy special items or to make the gameplay easier.

Stardom: Hollywood uses Apple, Inc.’s Game Center and Facebook to allow players to add friends to co-star with, date, or send gifts to.

Links to Aid you in the Game:

Information about Glu and Getting Involved:

This is a wiki about the Stardom: Hollywood app! Anyone can help, but please add honest information!! If you tamper with the site in any way, shape, or form, you will be blocked. ANY sort of vandalism stated in Wikia's Terms of Use will be blocked, no exceptions. We want to keep this an awesome wiki and any unacceptable or unnecessary actions or edits will not be tolerated.
Your admins,


▶ Summer styles for guys and gals!
▶ New quests from your agent and Charlene!
▶ Level 35 added
▶ Millions more fans added for A-Listers to earn
▶ Keep up with Starnews' Ray Powers on Twitter for new interviews
(@StarnewsRay)
▶ Watch out for weekend deals and promotions!

Thanks for contributing to the wiki! :)


Who is your agent?

Retrieved from "https://stardom-hollywood.fandom.com/wiki/Stardom:_Hollywood_Wiki?oldid=25121"
Community content is available under CC-BY-SA unless otherwise noted.